This is Violette Szabo one of my personal heroes. Violette was a SOE agent during ww2. She was a wife, widow, mother & spy. Violette was executed at Ravensbruck Concentration camp on February 5th 1945, just months shy of the end of ww2. She was just 23 year old at that time. Violette was one of the only female spies to receive a medal for her heroic acts during ww2, she received the George Cross. Her story is a fascinating one and I urge anyone who doesn’t know about her to look up her life story.

I have chosen to use my blog to honour Violette’s death by posting every day for a week from the anniversary of her death. 7 posts/books relevant to her life story. There is 4 Fiction and 3 Non-fiction novels on the list planned. The novels will all be written by female ww2 writers.

I have some other themes planned for this blog and of course, I have a plan to feature male writers of ww2 fiction & non-fiction. I will state a disclosure that NONE of my themes will be of a political nature. I simply want to post across the genres and honour some of my personal heroes. I sincerely hope you will enjoy the posts and continue to follow my blog.

Please feel free to let me know your thoughts on this theme. It would be awesome to create a blog that is also a form of a virtual book group and offers discussion on issues or themes. Allowing everyone to have their say on book recommendations, authors, genres etc. I sincerely hope it works! I will also continue to post new releases & reviews for novels due to be released, in all genres.

This novel reminded me of some of Tess Gerrisen’s novels, in the sense that it was a medical/crime/thriller. It is most definitely not a police procedural, as the police rarely feature. I think this helped this book stand out at a time when the genre is hugely popular.

The novel revolves around 3 central characters
Anne- the slightly obsessed workaholic nurse that runs ward 9B.
Cassie – the main character & victim of the attack, who is in a coma on ward 9B.
and Frank – A fellow patient on ward 9B, who is suffering from locked-in syndrome (brought on from alcohol abuse).

There is so many themes within this novel, that make it gripping reading. Themes of betrayal, shame of the past, obsession and emotional pain. Some of the medical facts are slightly off, but given its complex nature and intensity, I was happy to glance over them. I have myself in my career cared for someone with locked-in syndrome and it is a very accurate portrayal of the condition. I found the whole whodunit? angle was really ramped up by there being so many potential suspects. I couldn’t & didn’t guess the ending, which is unusual for me. The ending is cracking & I sincerely hope the author has another already in the pipeline?
A fantastic debut novel 5*
Review will also be posted to my blog annebonnybookreviews.wordpress.com & FB page Anne bonny book reviews.

* I received a netgalley copy in return for an honest review.

I recently read one of the authors latest novels under a watchful eye for review via netgalley. It really reminded me of my love for the genre, so I’ve been making a conscious effort to include more horror in my reading pile! I also wanted to distract myself from 2017 by falling into a good story.

This novel is very protagonist based & essentially that is what makes it work so well. Everything about the protagonist Catherine is surrounded in mystery, unhappiness and a general eerie feeling. Catherine is written so very well, that it is possibly up there with my favourites. Catherine suffered a childhood marred by bullying & suffering. Her only childhood friend a disabled little girl named Alice disappeared in a cloud of mystery. As an adult Catherine is plagued with ‘trances’ leading me to believe she has suffered mental health problems. She has worked hard to overcome them & other issues in her life and now has a new job as a valuator for a small firm.
Catherine is asked by her boss to value the objects of the late M.H Mason at his estate The Red House. Now this is where the novel really ramps up the creepy factor!

Catherine attends at The red house, which has been kept in its original Victorian style and is met by the mute housekeeper Maude & M.H Mason’s niece and beneficiary Edith. Edith is a cantankerous old battle axe, but Catherine ultimately see’s the potential of financial gain for her firm, from the sale of the items up for valuation. So whilst feeling uncomfortable & weary herself agrees to stay. ( This is the part at which I screamed at the book……….NO ………DON’T STAY). The items for valuation include taxidermy animals, antiques & puppets! The description of the items & house did not scare me as such, there is just this constant eerie feeling throughout the novel.

To say anymore would be to provide spoilers but the mystery at Red house is thoroughly haunting & I would recommend to fans of horror and anyone looking for something different!
An impressive read and I will be adding ‘no one gets out alive’ & ‘apartment 16’ to my TBR pile!  5*

Yesterday I saw in tabloids in both the USA and the UK articles relevant to a non-fiction book I read for review (via netgalley) last year. The book was The blood of Emmett Till by Timothy B Tyson. Now I don’t wanna use this blog to lecture anyone about their beliefs of impose mine on others. But I do think books like this are very important and access at colleges, schools and University could serve to broaden many minds. As stated in my review below, I was not alive in this era, nor am I American. But I can see the huge importance of this books message. 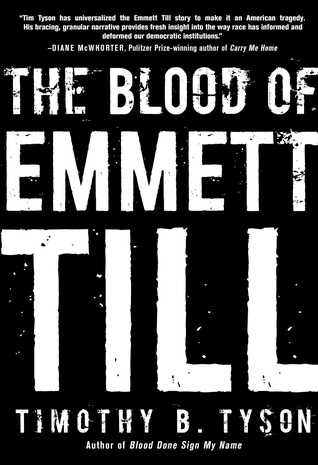 This book is a comprehensive look at the racism, hatred and violence that led to Emmett Till’s death and how it contributed to the civil rights movement.
I have long known the violent death that Emmett Till suffered, despite being only born in the 1980’s and British. However I never knew the details and how his death played a part in the greater history of civil rights. This book provides all that, it is well written and backed up with factual references and court testimony. Personally I would like to see this book made available in schools, to educate the next generation on the brutality and violence that comes with racism and hatred.
The book often reflects on the modern day race struggle, that is well documented in media in America. The last chapter and the epilogue being the most poignant. I must admit my concluding thoughts did drift to the more recent murder of Trayvon Martin and how his family were also denied justice. Obvisously there are differences within each case, however the central reasoning for the deaths seemed to be ‘they were black teenagers, who dared to be black teenagers’!
Emmett Till is a name that I sincerely hope never fades from history and most importantly never fades from history in times where racist rhetoric seems to become the ‘norm’. It is important that we are learn from history or we will repeat the same mistakes. Or in this case we learn from the history or continue to make the same mistakes.

*I received a netgalley copy in return for an honest review.

The author’s first novel was my first read of 2016 and I found it incredibly atmospheric and moving. This is my 183rd read of 2016 & I am glad to see that the author hasn’t changed her style.
The novel is tough to review without leaving any spoilers for future readers, which I do not intend to do. But I will say this I think this a descriptive novel of ‘what could have been’ & how life may not always go the way we foresaw or intended it to.
The setting is perfect, I was looking for a nice coastal mystery and I was glad I found it!
I can see this novel having huge appeal to book groups as it has so much to debate and discuss. So I would hugely recommend to those who run book groups or are members.  4*