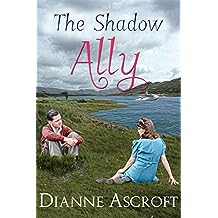 The Shadow Ally By Dianne Ascroft.

The shadow ally is book 1 in a Yankee years series. They each have a variety of themes and centre around the lives of women during ww2 in Northern Ireland. Each book is a short story.

The shadow Ally opens up in the rural countryside of northern Irelands. It centres around the relationship between Ruth & Harry. Although the novel centres around a romantic relationship, I wouldn’t class this as romantic fiction. What the author does is cleverly waive real issues into the plot & dialogue. Ruth & Harry’s story is one of a 1940’s courtship and describes the reality of the 1940’s era’s influence on relationships. It shows the power divide between men & women, ultimately this was the era when women were just starting to find their voices. I absolutely love the subtle feminism within the story & I was glad it was written so very well

The plot primarily focuses on the secrecy, mystery & suspicion that was engrained into society. With the Americans not in the war yet, spies lurking in the midst & Lord Haw Haw on the radio. This was a time of fear and suspicion of even those closest to us! Ruth helps her mother run a local hotel. The hotel has many Americans residing and in particular handsome Frank. This is the story of how Ruth, Harry & Frank make it through the war. This novel is very well written & very well researched. A brilliant 5* short story!

The Shadow Ally is available on Kindle Unlimited for members or just £1.21 on Kindle Ebook.

America is not yet at war, but the country is preparing for it. And it is essential that this remain secret.

June 1941: Ruth Corey is puzzled by the attractive, enigmatic Italian-American civilian contractor, Frank Long, who is staying at her family’s hotel in Irvinestown, County Fermanagh, Northern Ireland. Serious and reserved, he is nothing like the friendly, outgoing British and Canadian servicemen she knows. Nor, she discovers, does he even use his real surname.

War is a time of alliances and secrets. The biggest secret in the county is the construction of an American flying boat base outside Irvinestown. Since their country is not at war, the American contractors must conceal the building project. America’s neutrality will be destroyed if Germany discovers its existence.

Ambitious local reporter, and Ruth’s almost fiancé, Harry Coalter is consumed with curiosity about the new American airbase. But why? When Ruth finds a letter Harry has written about the flying boat base she fears he is pursuing a path that will land him in serious trouble. She enlists Frank’s help to stop Harry from making a terrible mistake.

Can Ruth safeguard a military secret that will have a profound impact on the course of the war and protect her beau?