Violette Szabo Theme day 5: The forgotten voices of the Holocaust by Lyn Smith.

This is my second non-fiction pick of the theme. I own about 50/60 ww2 non-fiction reads, I am a huge fan of Laurence Rees, Max Hastings books and many that feature individual units surrounding D-Day. Especially the Para’s! I will most definitely feature these at a later date. However to keep with my Violette Szabo theme, I wanted to feature female writers of the WW2 era in both fiction and non-fiction. The author Lyn smith is a Professor of Politics, International relations and Human rights and the book is written in association with the Imperial War Museum. The book also features an foreword  from Laurence Rees. 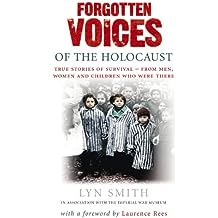 What I like about this non-fiction read, is difficult to fully explain, So I have decided to use photographs of my copy of the book to fully show what I mean. Each chapter details a different part of the Holocaust such as: the search for refuge, the ghetto, the camps, liberation and aftermath etc. Each chapter has a factual introduction and then the subject is explored via written testimony of interviews from the individuals whom lived it. This could be the survivors or the very soldiers who liberated the camp. (Belsen camp was liberated by British soldiers). There are images imprinted onto the paper pages and they do make for disturbing viewing. But in my opinion, that is part of the learning about the era and in particular the Holocaust. My daughter (soon to be 14) has borrowed these books from me for school work & I have just offered to explain anything I can to her, rather than shield her from the facts. That being said, that’s just my opinion for my daughter.

I bought this book several years ago & it was in fact first published in 2005. But I hope I have shown why it is such a worthy entry to the theme. A 5* non-fiction read of a very difficult period of history.

Following the success of Forgotten Voices of the Great War, Lyn Smith visits the oral accounts preserved in the Imperial War Museum Sound Archive, to reveal the sheer complexity and horror of one of human history’s darkest hours.

The great majority of Holocaust survivors suffered considerable physical and psychological wounds, yet even in this dark time of human history, tales of faith, love and courage can be found. As well as revealing the story of the Holocaust as directly experienced by victims, these testimonies also illustrate how, even enduring the most harsh conditions, degrading treatment and suffering massive family losses, hope, the will to survive, and the human spirit still shine through.