I chose this novel for the final day of the Violette Szabo theme as although it is centred around WW2 & the holocaust it also features a strong theme of motherhood. Violette Szabo left her young daughter behind when she left for France on an SOE mission. She would go on to be captured an executed at Ravensbruck concentration camp. Her young daughter Tania Damaris Desiree Szabo would later receive her George Cross medal posthumously.

The KING has been graciously pleased to award the GEORGE CROSS to: —

Madame Szabo volunteered to undertake a particularly dangerous mission in France. She was parachuted into France in April, 1944, and undertook the task with enthusiasm. In her execution of the delicate researches entailed she showed great presence of mind and astuteness. She was twice arrested by the German security authorities but each time managed to get away. Eventually, however, with other members of her group, she was surrounded by the Gestapo in a house in the south-west of France. Resistance appeared hopeless but Madame Szabo, seizing a Sten-gun and as much ammunition as she could carry, barricaded herself in part of the house and, exchanging shot for shot with the enemy, killed or wounded several of them. By constant movement, she avoided being cornered and fought until she dropped exhausted. She was arrested and had to undergo solitary confinement. She was then continuously and atrociously tortured but never by word or deed gave away any of her acquaintances or told the enemy anything of any value. She was ultimately executed. Madame Szabo gave a magnificent example of courage and steadfastness.

When I think of Violette Szabo, I see a strong woman, a hero who showed ultimate courage and gave her life for her country. But it is only when I look at the above image of her daughter, I truly see what she sacrificed in her fight for freedom. She sacrificed her mother hood 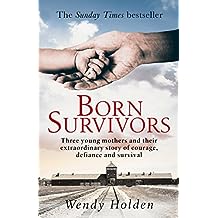 I read this novel several years ago, buying it as soon as it was released in hardback. The book is the non-fiction story of Priska, Rachel and Anka & their fight for survival in Auschwitz. What separates this book from the many others, is that when Priska, Rachel & Anka arrive at Auschwitz they are hiding a secret……..They are pregnant.

I don’t need to expand & do a full review as the blurb gives full details. But I will say that I have read many non-fiction holocaust and WW2 reads and I found this one incredibly moving & very well written. 5*

Among millions of Holocaust victims sent to Auschwitz II-Birkenau in 1944, Priska, Rachel, and Anka each passed through its infamous gates with a secret. Strangers to each other, they were newly pregnant, and facing an uncertain fate without their husbands. Alone, scared, and with so many loved ones already lost to the Nazis, these young women were privately determined to hold on to all they had left: their lives, and those of their unborn babies.

That the gas chambers ran out of Zyklon-B just after the babies were born, before they and their mothers could be exterminated, is just one of several miracles that allowed them all to survive and rebuild their lives after World War II. Born Survivors follows the mothers’ incredible journey – first to Auschwitz, where they each came under the murderous scrutiny of Dr. Josef Mengele; then to a German slave labour camp where, half-starved and almost worked to death, they struggled to conceal their condition; and finally, as the Allies closed in, their hellish 17-day train journey with thousands of other prisoners to the Mauthausen death camp in Austria. Hundreds died along the way but the courage and kindness of strangers, including guards and civilians, helped save these women and their children.

Sixty-five years later, the three ‘miracle babies’ met for the first time at Mauthausen for the anniversary of the liberation that ultimately saved them. United by their remarkable experiences of survival against all odds, they now consider each other “siblings of the heart.” In Born Survivors, Wendy Holden brings all three stories together for the first time to mark their seventieth birthdays and the seventieth anniversary of the ending of the war.

A heart-stopping account of how three mothers and their newborns fought to survive the Holocaust, Born Survivors is also a life-affirming celebration of our capacity to care and to love amid inconceivable cruelty.

*Although this is the final day of the Violette Szabo theme. I shall be running further themes and this will include WW2 fiction & Non-fiction reads. I plan to run it in memory of those who gave their lives during D-Day. Also in memory of the bravery shown by some of my personal heroes Lieutenant-Colonel Peter Luard & Alan Turing. So there will be a mixture of themes such as: Specific battalions, military tactics, code-breaking, LGBTQ Characters and much more. As with this theme, I will be celebrating the bravery of these men by male writers. This will run for a full week from the 6th June!