Every so often I feel the urge to read a novel from way before my time. I think it is important to read novels from not only a different decade but an entire different era. This is exactly how I stumbled across one of my ultimate favourite novels Alone In Berlin by Hans Fallada. I picked Last Exit to Brooklyn due to its unique blurb, also discovering it had previously been banned in the UK! I like edgy, gritty reads that are not afraid to portray a darker narrative of life and there isn’t much darker than this! 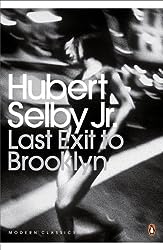 Few novels have caused as much debate as Hubert Selby Jr.’s notorious masterpiece, Last Exit to Brooklyn, and this Penguin Modern Classics edition includes an introduction by Irvine Welsh, author of Trainspotting.

Described by various reviewers as hellish and obscene, Last Exit to Brooklyn tells the stories of New Yorkers who at every turn confront the worst excesses in human nature. Yet there are moments of exquisite tenderness in these troubled lives. Georgette, the transvestite who falls in love with a callous hoodlum; Tralala, the conniving prostitute who plumbs the depths of sexual degradation; and Harry, the strike leader who hides his true desires behind a boorish masculinity, are unforgettable creations. Last Exit to Brooklyn was banned by British courts in 1967, a decision that was reversed the following year with the help of a number of writers and critics including Anthony Burgess and Frank Kermode.

Hubert Selby, Jr. (1928-2004) was born in Brooklyn, New York. At the age of 15, he dropped out of school and went to sea with the merchant marines. While at sea he was diagnosed with lung disease. With no other way to make a living, he decided to try writing: ‘I knew the alphabet. Maybe I could be a writer.’ In 1964 he completed his first book, Last Exit to Brooklyn, which has since become a cult classic. In 1966, it was the subject of an obscenity trial in the UK. His other books include The Room, The Demon, Requiem for a Dream, The Willow Tree and Waiting Period. In 2000, Requiem for a Dream was adapted into a film starring Jared Leto and Ellen Burstyn, and directed by Darren Aronofsky.

Putting aside that this novel is written in 1967 & is considered a modern classic in 2017, by the time I personally got to read it. I would definitely label this as one of those novels, where the author seeks zero validation in way of reviews/awards etc. I personally feel this is a story that has gone round & round in the authors mind and he desperately needed to get it out!

I am a baby of the 1980’s and a teenager in the 1990’s. Growing up with parents that refused to censor what I read, watched or listened to. I considered myself hard to shock & thought in some way shape or form I had seen it all! That was until this novel! I found this novel deeply traumatising, however no matter how much I tried, I simply couldn’t look away! At times I was reading the novel with one hand over my face, as if this would in some way offer a shield from myself & the story!
The personal story’s of the characters Georgette & Tralala are the first two you read. Be warned they are extremely dark and depict scenes of violence physically, sexually and mentally. This is no light & fluffy read and it contains not one single light & fluffy paragraph.
This being said that is the beauty of this novel. Not only is it a viewpoint to ‘see how the other half live’ it also tells the story from their perspectives individually. The characterisation is intense and I will admit that the plight’s that await Georgette & Tralala, had me in tears. This really is a story of violence & degradation, I feel incredibly glad I have finished the novel but yet I find myself ordering The Room by Hubert Selby Jr right now!
A dark, gritty, edgy, violent portrayal of life in the 1950’s for a bunch of (what the era dictates are) misfits. 5*